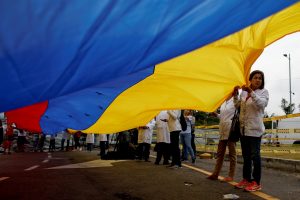 Editor’s note: As a private citizen, Steve Salisbury has provided observations to United States high-ranking officials of both Republican and Democratic administrations and played what could be said was a key role as a de facto precursor “intermediary” between US officials and Colombia’s FARC guerrilla group before the naming of a US presidential special envoy to the peace process between the Colombian government and FARC, which together signed a peace accord in late 2016. The report herewith is an edited, expanded version of one that Salisbury wrote and sent recently to US State Department senior officials and other US inter-agency officials who cover Venezuela.

Preface: Steve Salisbury is in a special position to analyze and make recommendations for the peace talks between Colombia’s government of President Juan Manuel Santos and largest guerrilla group, the Marxist-Leninist predominantly campesino … END_OF_DOCUMENT_TOKEN_TO_BE_REPLACED

With fanfare before a crowd of invitees, including famous Colombian pop stars and athletes, on February 4 at a White House commemoration of over 15 years of Plan Colombia—a program where Colombia has received some 10 billion dollars in US assistance … END_OF_DOCUMENT_TOKEN_TO_BE_REPLACED

It appears to be that the odds are heavily against an overall complete peace agreement being signed between the Colombian government and FARC by March 23, from where things stand now and as I predicted earlier in my reports to US officials, basing my … END_OF_DOCUMENT_TOKEN_TO_BE_REPLACED

Another question that could affect the length of the peace talks with the FARC is the matter of Colombia’s second-largest guerrilla movement, the “National Liberation Army” (ELN), which says its date of founding was July 4, 1964, a couple months … END_OF_DOCUMENT_TOKEN_TO_BE_REPLACED

Steve Salisbury is a private consultant with a background in media as a photojournalist, war correspondent, TV producer, analyst and commentator, covering Latin America. Read More…

Sidebar: Some of the Hardest Issues to Resolve at This Juncture in Colombian Peace Process

What about the FARC and extradition?

What about the FARC's "Simon Trinidad"?

Will time run out on Pres. Santos?

A "Memo of Understanding" to End War, if March 23 "deadline" Is Missed?